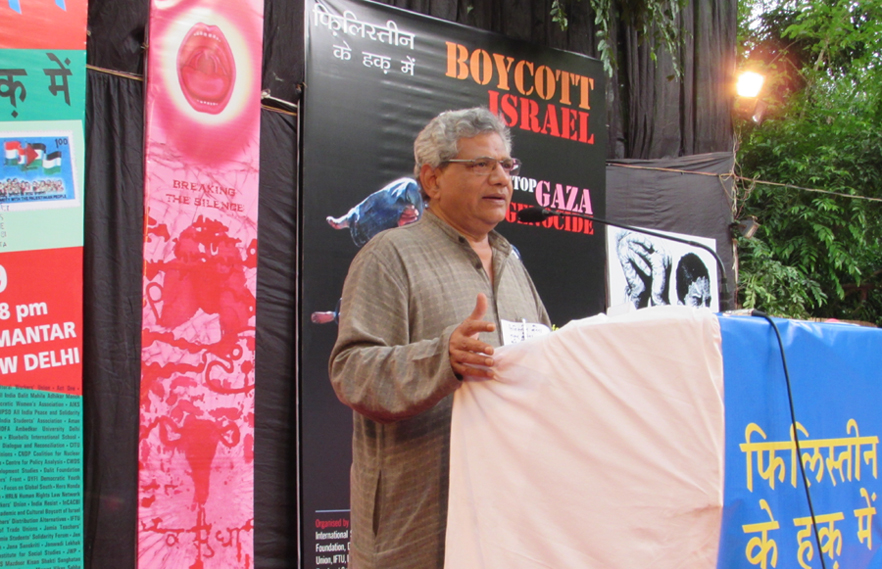 ON  the occasion of the call given by the Palestinian Boycott, Divestment, Sanctions (BDS) Movement to observe August 9 as the ‘Day of Rage’ more than 70 political and cultural organisations including Left organisations such as Safdar Hashmi Memorial Trust (SAHMAT), Jan Natya Manch, All India Democratic Women’s Association (AIDWA), National Federation of Indian Women (NFIW), Janwadi Lekhak  Sangh, Jana Sanskriti, Centre of Indian Trade Unions (CITU), Democratic Youth Federation of India (DYFI), Students’ Federation of India (SFI), All India Students’ Association (AISA), All India Kisan Sabha (AIKS) and Progressive Writers’ Association (PWA) among others came together on a common platform to stage a demonstration condemning the unjustified and brutal military aggression of Israel against Palestine. The protest gathering organised at Jantar Mantar coincided with two historically significant events, the seventy second anniversary of the Quit India movement and the sixty ninth anniversary of the atomic bombing of Nagasaki by the United States of America.

The over four hour long programme, which also saw participation of school children from two prominent Delhi based schools – Bluebells School International, Kailash Colony, Delhi and Springdales School, Dhaula Kuan, Delhi – was initiated by Sohail Hashmi who recited poems by well known Palestinian poet Mahmoud Darwish and Faiz Ahmed Faiz. The poems set the mood for the evening.  These were followed by a series of speeches by various individuals each condemning Israeli action and demanding severing of military and diplomatic ties with Israel.

Manisha Sethi representing Jamia Teachers’ Solidarity Association, who was among the earliest speakers for the evening, strongly  advocated for an end to any nuclear as well as military co-operation with Israel till it ends its brutality against the people of Palestine and vacates their homeland. Drawing a picture of hope Harsh Mander in his short speech wished for a day when Israel would learn to live with Palestine. He also demanded that the world community must take steps to isolate the government of Israel in the manner that it did in case of South Africa during the apartheid years.

Members of political parties present also made speeches on the occasion. D Raja, Rajya Sabha MP of the Communist Party of India, comparing the Palestinian crisis with that of the Sri Lankan crisis criticised the neutrality approach that the Indian government tends to adopts when it comes to such humanitarian crises. He argued that since neutrality indicated support for Israel’s inhuman act. He demanded the incumbent government should take a clear-cut stand in favour of Palestine. Invoking Mahatma Gandhi’s clarion call to the British to quit India on this very day, he said that people have gathered here to give a similar call to Israel to quit Palestine.  DP Tripathi, Rajya Sabha MP of Nationalist Congress Party (NCP) and Mani Shankar Aiyar, Rajya Sabha MP of Congress also raised similar concerns and vociferously demanded condemnation of Israel’s action.

Sitaram Yechury, Rajya Sabha MP from the Communist Party of India (Marxist) derided incumbent Narendra Modi government for choosing to be a mute spectator to the violation of all international norms by Israel and treading the path of USA by not condemning this gross violation of human rights by Israel. He said the people of India will stand by their Palestinian brethren. He also said that Israel has illegally occupied the Palestinian land and it has no moral right to attack the Palestinian population. Israel, he pointed, is a rare example in the world history of an illegal state.

Yechury said that the self defense logic that the Israeli government is repeatedly stating has no basis whatsoever and it should realise that the people of India would continue to condemn every action of Israel on Palestine until the former leaves the Palestinian people’s homeland. He pointed out that it is disgraceful that India is the largest importer of Israeli made arms and he demanded that India should immediately end this buyer-seller relationship with Israel.

Before concluding he threw light on the present government’s double standards where in spite of the prime minister signing a resolution in the recently held BRICS summit in Brazil to stop Israeli attacks on Palestine and make East Jerusalem as the capital of Palestine, the external affairs minister Sushma Swaraj not agreeing to leading the government in condemning the Israeli action in the parliament. It is intriguing he said that while the Vajpayee government was not hesitant in condemning US attacks on Iraq in the parliament it is very hesitant in doing the same thing in the present scenario. This, he said, puts a question mark on the intentions of the government.

Mohammad Adeeb, an independent Rajya Sabha MP, said that he had on several occasions raised the question to know the number of Memorandum of Understanding (MOUs) the Indian government has signed with its Israeli counterpart but on every occasion he was left unsatisfied with the government choosing not to enter into this debate. He further said that the Israeli army may be among the best armies of the world but for him it is the worst army in the world as it does not feel hesitant in killing innocent children.

Achin Vanaik in his speech pointed out that the self-defense logic of Israel does not hold any water as they are occupying the Palestinian land illegally and it is the people of Palestine who have the right to self-defense and fight the Israeli atrocities and not the other way round.

The short but precise speech of Aijaz Ahmed was, one can say, one of the highlights of the evening. In his speech he brilliantly encapsulated the reasons for boycotting Israel in all forms and the reason for the people to come out on streets and protest against Israel’s military action against Palestine.

Others who raised similar concerns and registered their protest and strong support for the Palestinian people included well known names such as Justice Rajinder Sachar, Colin Gonsalves, Amit Sengupta and Paul Divakar and Seema Mustafa among others. Among the speakers was also a woman named Mafaz from Gaza who gave a first-hand account of the daily struggles that the people of the region have to wage in order to survive the Israeli occupation.

Mahmoud Darwish seemed to be the flavour of the evening as his poetry was recited at frequent intervals along with that of Faiz Ahmed Faiz. MK Raina, Manglesh Dabral, K Satchidanandan and Vineet Tiwari all beautifully and poignantly recited lines from the poet’s different compositions thereby making the evening a memorable one. Darwish’s poems were, in fact, recited even by the students of Bluebells and Springdales schools. Syeda Hamid in her turn also recited poetry, however, instead of Darwish she chose to recite lines from two poems one each by Iqbal and Faiz.

Apart from the speeches and poetry recitation, the evening was marked by other events as well. An exhibition showcasing the conditions of the Palestinians who have been victims of the Israeli onslaught was put up. No one was left unmoved after seeing the pictures and images that were put up in this exhibition. A street theatre performance was done by the well known street-theatre group Jan Natya Manch (JANAM) which depicted the horrors that have been inflicted on the lives of Palestinians as a result of this war. The performance had Sudhanva Deshpande reciting a poem that brilliantly brought forth the agony and the pain felt by women and children of Palestine. Earlier in the day there was also a short one-act feature that had a person putting up masks of Modi and taking ‘selfies’ (a recent technological term that has come into vogue meaning taking pictures of one self.) The act was a symbolic one showing the pre-occupation of India’s prime minister with himself without being least bothered about the political and social crises of the world.

Later in the evening a performance was put up by artist Indu Salim in which several watermelons were smashed one after the other and from these came out olives (the fruit of Palestine) symbolising the bloodshed that has been inflicted on the Palestinian people and their struggles against Israeli occupation of their homeland.

Huge banners depicting paintings by several well-known artists with interesting themes and messages were put up at several points at the demonstration site. There was also a photo-booth that was put up where one could see individual demonstrators getting themselves clicked with Palestinian flag in hand and wearing the chequered scarves with a backdrop of protest slogans and messages of solidarity. The pictures clicked as a part of showing solidarity for the Palestinian cause would be uploaded on YouTube and other social networking sites. An arrangement was also made for individuals present to write messages on the post cards meant for the Palestinian people which would be submitted to the Palestinian embassy so that it could reach the people of Palestine.

As the programmme drew to close, a resolution was unanimously passed. It demanded of the Indian government to ‘immediately’ and ‘unequivocally’ condemn Israel’s war on Gaza, raise voices at international level in support of Palestinians’ demands for lifting blockades and indefinite ceasefire, boycott all forms of collaboration with Israel and Israeli corporations and end military ties with Israel.

Earlier in the evening several artists including Maya Rao did stand-up political satire on the issue.

A huge banner was erected at the site by the students of Ambedkar University, Delhi which had protest slogans written all over it, in different languages such as English, Hindi, Urdu, Tamil, Malayalam and Bengali among others. Students were seen making graffiti on it against Israel’s aggression.