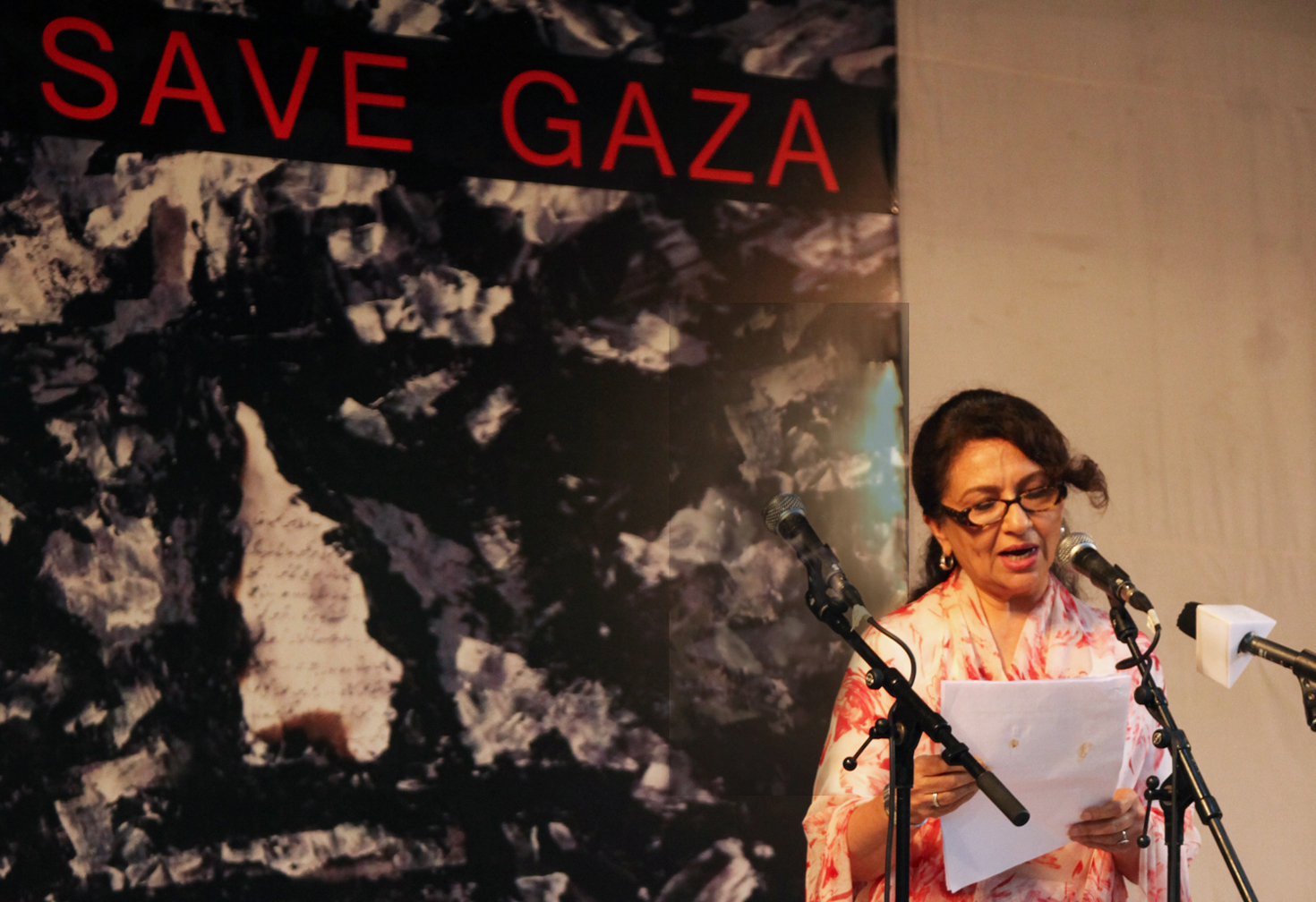 WITH Israel-Gaza conflict claiming nearly 1,400 Palestinians lives, theatre personalities, activists and musicians today organised a cultural protest on July 31 against Israel and in solidarity with the Palestinian people.

The celebrities sung songs with "anti-war" lyrics and recited "pro-peace poems" at an event in the backdrop of pictures of the violence intertwined in barbed wires and keffiyehs (scarfs worn by Palestinian men and a symbol of Palestinian nationalism during the Arab Revolt of the 1930s) hung from above as a mark of protest.

Veteran actor Sharmila Tagore recited poems on the occasion and "personally supported the cause."

"John Kerry is in Delhi today. Indian people have always stood with the Palestinians in their struggle against Israeli aggression. They must ensure that the new Indian government carries on this tradition of support for, and solidarity with the Palestinian struggle," said Rahman.

Historian Sohail Hashmi recited few ghazals on the ongoing war against the Palestinians.

The following is the statement issued on this occasion.

The ongoing bombing by Israel of Gaza, a densely populated land where the number of persons per arable area is almost 18 times that of India, is a wanton exercise in savagery. It is a unilateral escalation of violence against a people whom Israel has subjugated for decades like a colonial power, and against whom it has additionally imposed a blockade since 2007 at great human cost.

Israel’s justification that its action is meant to retaliate against rocket attacks by Hamas does not stand up to even the most casual scrutiny. In this latest escalation, over 1300 Palestinians have been killed, of whom 80 percent are civilians and at least 300 are children, as opposed to just three Israeli civilian deaths. And if Israel is genuinely concerned about human rights violation, then it should have accepted the proposal of the UN Human Rights Council to create an independent international commission of inquiry to investigate all violations of international human rights law in all of Palestine, particularly in the Gaza Strip. Instead it got its main backer, the United States, to cast the sole vote against this proposal at the Council.

It is ironic that Israel claims that it will not tolerate these rocket attacks from “outside its borders”, but it has never once specified what its borders are. In fact it has pursued an unabashed policy of displacing Palestinians and imposing its own housing settlements wherever it can.

The so-called attacks by Hamas are merely an excuse that Israel uses to step up its aggression whenever it wishes: to terrorise the Palestinians even more, to break their resistance, to destroy their unity, to sap their will and dignity as a people, and to disrupt their National Unity government that has scrupulously abided by all the international demands of legitimacy. And it tries to use the world media to present itself as the victim, to camouflage its own aggression as mere self-defence.

This gory saga must end forthwith. While an immediate ceasefire is a must, Israel has treated all past ceasefires as if they simply did not exist; it regularly carried on aggressive acts with impunity even when the ceasefire was on, and both in 2009 and 2012, it wantonly violated the ceasefire through an escalation of aggression, exactly as it is doing now. The people of Gaza must be rescued from the syndrome of Israel bombing at will and ceasing to bomb at will. And they must be rescued from the abject state of living to which the blockade has reduced them. Any cease fire to be meaningful must be accompanied by international supervision of human rights violations in Occupied Palestine, and by an immediate lifting of the horrendous blockade of the Gaza strip.

What the international community must seek is to make Israel cease this deliberately planned cycle of first reducing a population to utter economic and political desperation and then making their stray, ineffectual acts of despair an excuse for further destroying their society  through brutal military operations of the sort we are witnessing.

Israel will not accept any international demands upon it as long as it enjoys the backing of the United States. Even as it is committing its current international crime, President Obama significantly has not uttered a single word of censure against Israel, despite John Kerry’s incautious expression of exasperation with Israel.

World public opinion must be roused against the aggression by Israel some of whose ministers have even talked of “ethnic cleansing”.

The Indian people have always stood with the Palestinians in their struggle against Israeli aggression. They must ensure that the new Indian government carries on this tradition of support for, and solidarity with, the Palestinian struggle. An expression of this would be a complete embargo on all ‘security’ related dealings with Israel.